Eight weeks ago my little girl was diagnosed with Developmental Dysplasia of the Hip and following an operation, she was put into a Spica Cast.

Though it has been difficult at times, we have adapted well to life with a child in a spica cast. 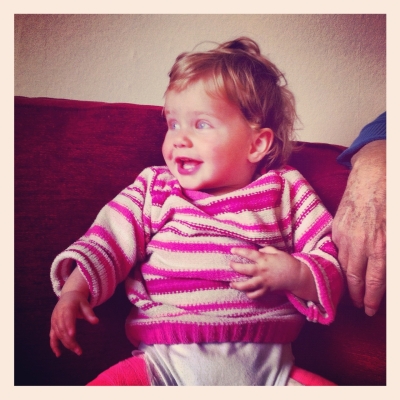 A lot of people have found Bishopston Mum through internet searches on ‘Developmental Dysplasia of the Hip’ and ‘spica casts’.

Therefore, I wanted to write a one-off post about how we care for our daughter while she is in a spica cast which will hopefully help other parents whose children have been diagnosed with DDH.

Regular followers of Bishopston Mum, please bear with me!  Normal service (i.e. posts about activities in the area) will resume tomorrow 😉

Positioning a child in a spica cast:

We were very lucky to be loaned a ‘Spica Chair’ by Bristol Children’s Hospital.  My daughter enjoys sitting in this and playing.  She eats snacks while sitting in it, too.  If you have a child who is about to be put in a spica cast, I recommend you ask the hospital if it is possible to have one. 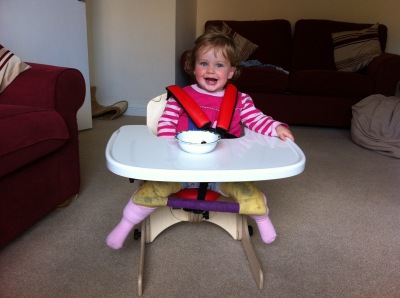 My daughter in her Spica chair

Sometimes, she likes to sit on a bean bag, too.  Otherwise, she is quite happy on her back, reading her books or playing, and more recently, rolling around and exploring 🙂

Not being able to move has been very frustrating for our daughter.  She gets bored quickly in a certain position and needs to be helped into another position frequently which can be tiring.

Luckily, with the help of a rolled-up towel and a pillow beneath her, our daughter fits in the front seat of our Phil ‘n’ Ted double pushchair.  Because I also have a 3-year-old who still needs to sit in the pushchair sometimes when he gets tired, being able to use the double pushchair to get out and about makes a HUGE difference to me.

If I hadn’t been able to use our double pushchair, I think we would have ended up quite isolated and restricted.  Because we have the double pushchair, we can still access playgroups, shops, see friends and just go for walks when we want.

Unfortunately, my daughter does not fit in a conventional car seat (and we have tried several).  We could hire one, but to be honest, living where we do, near to shops, playgroups, pre-school, friends, etc, we opted to do without until our daughter comes out of her cast.

My daughter does not fit in a conventional high chair.  However, a friend of mine loaned me a Totseat which we use instead.  In case you don’t know (I didn’t!), a TotSeat is a cloth high chair which fits onto any chair with a back.  This has made a big difference to our lives.

Because of the TotSeat, my daughter is able to sit and eat with us at the dining room table, at the same level, too.  I would definitely recommend you getting one.

My daughter in her Totseat

Sleep-wise, the first couple of weeks following my daughter’s operation, were hellish.  She woke up continually throughout the night and nothing I did seemed to help.  It was exhausting.  This was just a phase, luckily.

Because of the unreliability of her nappies, we have raised the head end of her cot.  Therefore, any leaky wee travels down into her nappy rather than up her back.

Because a child in a spica cast is unable to lie on his/her front, there is a risk of developing pressure sores, especially on their heels, from lying on their back for long periods at night.  We have a pillow under our daughter’s feet when she is lying in her cot to minimise this risk.  Sometimes re-positioning your child into lying on his/her side using pillows is also useful in preventing pressure sores.

The spica cast can not be allowed to get wet, therefore baths are not possible.  I give my daughter wash downs with her lying on a towel on the changing mat with a bowl of hot water and a flannel.  This is easy enough.

But washing her hair is tricky.  If you have a toddler, you will know how messy meal times are.  My daughter takes great delight in playing with her food and wiping it in her hair (and on occasion, tipping her bowl on her head).  I do miss not being able to just dunk her in the bath, throw a few jugs of hot water over her hair and have a clean girl again, job done.

I have found the easiest way of washing her hair is to to lie her on the kitchen sink over a large, folded towel with another towel over her to prevent her cast becoming wet.  I then use the kitchen mixer tap to wash her hair.  My daughter HATES having her hair washed like this but this is the most effective and quickest way of doing it.

I hope my guide has been helpful to you.  I recommend the Steps website for more information on caring for children with DDH.  Steps was very helpful to me when my daughter was first diagnosed.

To receive the next post on Bishopston Mum and keep up with our activities, please sign up by going to the top-right corner of this page where it says ‘Follow by E-mail’.  This is free and easy to do:-)