I recently had the pleasure of meeting Isobel Trout when I interviewed her about her role as Bristol Youth Mayor for Bristol Mum. 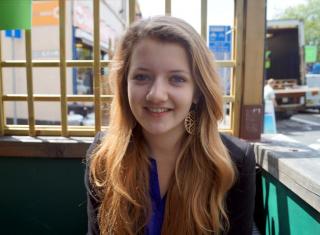 Isobel was raised and still lives in Bishopston. As a mum living and raising two children in the area, I was keen to hear Isobel’s thoughts on Bishopston as a place to grow up… from a young person’s perspective.

I hope you enjoy reading it.

Isobel, what are your thoughts on Bishopston as a place for children to grow up in?

Bishopston is very safe and I think there’s a good community feel about it. It’s a safe environment and there’s a wide range of things to do and to buy. Gloucester road is also a huge asset to the area. In your early teens you are starting to gain independence but if parents don’t want their kids to go as far as town, Gloucester road is ideal. There are lots of charity shops and when you’re in your teens this is quite a good way to “budget shop”and still support really good causes.

Bishopston is very leafy and it’s nice to have green spaces such as St Andrew’s park, Redland park and Horfield Common. There are loads of clubs, scout groups, dance activities, sports activities. There are lots of dance classes in church halls, lots of community halls available to use.


Which primary school did you go to?

I went to Bishop Road Primary School and most of the year group also continued to Redland Green school. Also, because the catchment is small, new friends also live close to you so the school retains the close-knit feel of the community which can sometimes be difficult in secondaries.

I have many fantastic memories of my time at Bishop Road. The school has a very caring ethos, and I still remember the many lovely teachers I had – right back as far as reception! I remember many opportunities in the arts – we got to sing at the Royal Albert Hall when I was in year 5, and perform at the Colston Hall on many occasions as part of the schools concerts in the summer.

What do you think of Redland Green School?

Redland Green is an amazing school, and I’ve really enjoyed the last 5 years there. My dad actually helped campaign for it back in 2003, and I remember visiting the Council house to campaign for “Redland School Now”as it was then. I started there in Year 7 and there’s been many changes since because it’s very new school – a work in progress!

I’m only the third year of GCSE’s at Redland Green, but they have fantastic results so far so fingers crossed! The sports department has a phenomenal trophy cabinet – a testament to their achievements, and the music department is developing with investment in the new “Jam Pod”- a silent rehearsal room, with personalised mixing capabilities. Redland Green also has many opportunities for extracurricular trips, ranging from trips to Berlin for History, sports tours and theatre trips to the West End. I have to thank the pastoral staff and my head of house, who have been really supportive throughout my time there, and I think that the caring community we have is one of the school’s best achievements.

As the school is getting older, more pupils continue into the sixth form, which I think will have a positive effect because they are known to the staff, and the ethos of the school.


What made you choose to do an International Baccalaureate (IB) over A-Levels?

I first heard about the IB from a friend of mine I knew from dance. She’s quite similar to me, so she suggested that I came to the information evening at her school because she was going to be helping out. We heard from past and present IB students, and from the teachers that deliver the course  – my parents and I were pretty sold on the idea! It’s designed to retain an all round education, which I liked, because I enjoy a variety of subjects, and I wouldn’t consider myself completely science focused or completely arts focused. It’s also good for people who don’t know exactly what they want to do, or who might change their mind, because they have a large range of subjects to draw from.
I started to find out more about it, for example it’s marked in a completely different way. The grades for each subject, as well as the core elements, combine to give an overall score, which is what universities ask form rather than individual grades. You study six subjects, three at higher-level and three at standard-level (sort of like A level and AS). This reflects the amount of content you study and the time you spend on each subject. What appealed to me was that all the exams are at the end, whereas during GCSE’s I had modular exam, so every exam season for the last 2 years I’ve had at least 3 exams, and I think this gives you more opportunity to do other things in year 12.
After sixth form,  I want to study medicine and if I had done A-levels I would probably have done all sciences and maths. On the other hand, if I do the IB, I can retain arts subjects, like french, whilst still doing the subjects I need for med school. The overall point score differs for each university, whereas at A level most require AAA or A*AA, so hopefully it will make me stand out a bit!

What activities do you do in and around Bishopston?

I go to Annette Adams School of Dancing where I’ve done ballet since I was three. I used to do contemporary and modern, but I’ve stopped recently due to my commitments with school work and my work as Youth Mayor. I really like the social aspect, there are some people I only see at dance, so I miss it when I don’t go. recently, I’ve been going to Zumba with my mum, because you can go whenever you don’t have to commit which is good during exams, and its also much nicer than the gym, because it’s also got a sociable as aspect, and the combination of dance and aerobics doesn’t make it feel like strenuous exercise when it is!

I also babysit (feel free to get in touch!), which is good money, but unreliable. I also love spending time with the kids, and catch up with the older kids I babysit. The Gloucester Road provides loads of Saturday jobs for sixth formers, especially with the number of cafes.

Do you think there are any improvements needed in/near Bishopston as a place for children and young people to grow up?

Bishopston is already a great place to grow up. I think more community arts projects, like on the boards in front of the old baths would engage local schools and young artists, and contribute even more to the area. I think that even more cycling provision such as bars to lock them at would encourage more young people to use them as a cheap and efficient form of transport.


I hope you enjoyed reading my interview with Isobel. If you would like to contact Isobel, she is on Twitter as @isobeltrout and her email address is youth.mayors@bristol.gov.uk.

To receive the next post on Bishopston Mum and keep up with our activities, please go to the top-right side of this page where it says ‘Follow by E-mail’.  It is free and easy to do.
Please click here to ‘like’ Bishopston Mum on Facebook and make my day!