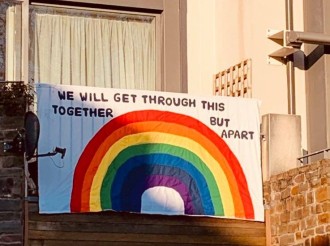 Lockdown has been a difficult experience for many, not being able to see family members and some even losing loved ones.  However, there have been a few positives to come out of it, such as getting to know neighbours and helping one another out; that sense of community spirit.

Many streets in Bishopston, Horfield, St Andrews and Ashley Down have come together during the coronavirus pandemic and have come out stronger.  I asked Bishopston Mum readers on the Bishopston Mum facebook page to give their views on how lockdown has affected their own streets and the response was heartening.

Local shops along Gloucester Road have also stood up in response to the pandemic and helped to strengthen the local community.  Joe’s Bakery, Pawsons, Rollquick and Preserve have offered all the essentials from day one in a calm safe environment, maintaining that sense of normality. Plus, queuing out on the sunny pavements has allowed people to chat to friends and neighbours at a safe distance.

The community group, “Mamas: Swaps & Freebies (Bristol)” has been doing huge work in the community such as making meals for those in need. One local member described how just before lockdown they were sharing things like toilet roll and hand sanitiser to make sure everyone had what they needed and how one woman collected surplus food to make up parcels for her neighbours.

Many readers reported how lockdown has brought their street together; as one person explained: “Our road has been so supportive.  We are definitely closer!”

Many people explained how their streets have set up WhatsApp groups, enabling neighbours to get to know one another, as well as a chance to reach out – and give – support when needed.

One person said, “We’ve all been in contact via WhatsApp – if someone is going to the supermarket, chemist or post office they check to see if anyone needs anything. We’ve made bulk orders between us for beer, wine and pies.”

Another person reports: “We have a Covid support group for residents of Radnor Road.  The neighbours are really active in it, offering support, doing takeaways from local places in bulk, ordering soil in bulk and sharing supplies”.

As well as collecting prescriptions and doing shopping for others, people have helped each other out by sharing their practical skills.  On Radnor Road one mum explained that the night before her little boy’s birthday, his birthday bike arrived in pieces and they had no idea what to do.  She decided to put a shout out on the street’s WhatsApp group and not one but two neighbours came to the rescue! 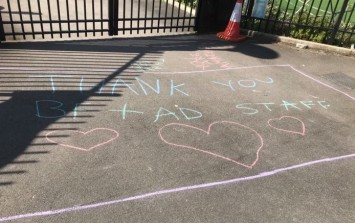 She explains: “Our new opposite neighbour came over at 9 on a Friday evening and we laid everything out on the drive on a sheet while he worked away on it. We were so so grateful, we dropped a bottle of wine over the next day as a thank you. That’s true community spirit”.

Other people report swapping seeds and plants with their neighbours, borrowing gardening equipment, having clear outs and sharing things they no longer need with neighbours.

One reader described how, as well as arranging trips the chemist and garden centre, sharing building products, buying in bulk and sharing out, her street’s WhatsApp group have also arranged social and culinary activities!  She explains: “We have had an amazing street meal delivered by a fab Vietnamese couple, Pieminster pies delivered and ice cream van arranged and an Assembly Rooms Bakery van every Friday where we line up and buy bread/pastries”.

The WhatsApp groups have also enabled local residents to support the wider community, for example, one person described her street’s regular joint effort to do a food bank delivery every week, arranged by one of their neighbours.

Some people have even provided entertainment for their neighbours, cheering their spirits. One person described her experiences of this in her street: “The best thing is every Thursday we have live music courtesy of one of our neighbours. The whole street comes out for a sing along and he and his son play guitar!”  One person described “beautiful dancing and VE Day celebrations” in her street and another “Sunday morning dances” in hers!

Local children have maintained existing friendships and even made new ones; one person explained that her children have had play dates on the opposite side of their road.  Another described how her daughter and her little friend often ride and race their scooters together and have great fun, despite being on opposite sides of the road!

And, while we long for the coronavirus crisis to come to an end, and at the same time the suffering of many, it is hoped that those positive changes made through lockdown will remain.

As one person simply put it: “I hope we are always like this”.

*Special thanks to local mums, Alice and Zoe, who very kindly shared these pictures with me for this article!