On the first Saturday of every May, Jack in the Green parades through Bristol.  A tall, green figure, Jack is swathed in green leaves and ivy, decked with bright ribbons and flocked by Morris dancers and musicians.

When Jack finally reaches the end of his long journey, he must ‘die’ so that Summer can begin.

Jack in the Green originated from the 16th and 17th centuries in Britain, when many would celebrate May Day by making crowns of leaves and flowers.

These crowns got bigger and more spectacular over the years as people became more competitive with their creations, until eventually Jack in the Green was borne.  The tradition of Jack in the Green was restored in the 1970s and Bristol is one of the few cities in England which takes part.

Jack in the Green with a Morris Dancer

This year Jack in the Green was due to meet his final, sad end at Horfield Common.  I thought it would be an exciting spectacle to take my children to see.  So, late last Saturday afternoon we walked up to Horfield Common to wait for Jack.  There were hoards of other people waiting for him too and you could feel the anticipation in the cold air.

At last we heard drum beats so we knew Jack was near.  Then, suddenly, in the distance, we saw him!  Unfortunately, at this point my little boy got very scared and tried to drag me in the direction of home.  I managed to reassure him that Jack was nothing to be scared of and that this was exciting, not scary!

We followed Jack in the Green with his assistants, across the Common.  Then Jack stopped and the Morris dancers began their merry dance around him, in their costumes of blue and green, waving their batons.  Although scared, my son was entranced.  Then suddenly, it was time for Jack to ‘die’…

Jack in the Green is heaved over by his assistants and stripped of his leaves and ribbons.  The crowds went to help the Morris dancers.  My son plucked up courage to help them and returned to me proudly with a tug of Ivy.

One of the Jack’s colourful assistants went round the crowds, handing out flowers to the children.

Here is a picture of my daughter with her flowers… 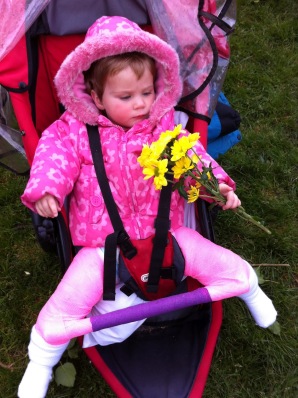 I am so pleased that I took my children to witness Jack in the Green.  It was yet another exciting experience for them to have, growing up here, in north-west Bristol 🙂